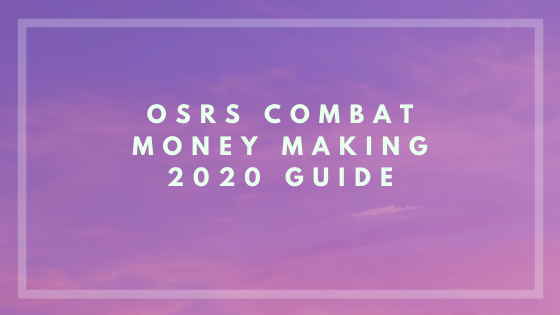 You can kill small monsters, bosses or train the slayer skill all using the combat skills. This guide will hopefully teach you a few of the combat money making methods which are available in Old school Runescape. They will benefit you immensely in terms of proving good and efficient money and combat EXP at the same time. Ensure to note that some of these money making methods could perhaps need you to be a member.

So you can buy gold from RunescapeGoldMarkt and with this gold you can buy purchase a bond from the Grand exchange. This is far cheaper than directing buying pure membership from the Old school Runescape website or purchasing a bond from the website. The first combat money making method is to slay green dragons. You will need an anti dragon shield, armour, a weapon, and it is recommended to bring anti fire potions, so that you will be dealt less damage. Combat or super combat potions, so that you can hit higher and ultimately get more kills per hour, meaning more GP per hour. Food is also recommended if you are not a high level player.

You will also need around level 65+ in melee skills or ranged in order to get decent hits. Magic is not recommended here at all as it barely does any damage. Green dragons are located just a few steps West as soon as you exit the Corporeal best cave in the wilderness. It is advised to keep good awareness as green dragons are a popular PKing spot and you may lose some valuable items so ensure not to bring anything too valuable. They have two simple attacks. These are extremely easy to counter, not difficult what so ever. Firstly you have a melee attack and it will only sometimes perform this move if you in its melee radius distance, which is about 1-2 tiles distance.

They will not use this move if you are far away from it, more than 2 tiles. The melee attack does not deal heavy damage but it can still be a good idea to bring some mid level food if your combat skills are quite low. The next green dragon attack is the fire breath. This can be deadly if there is no anti dragon shield and anti fire potions being used. These will protect you from receiving a lot of damage dealt to you. It is advised to keep in mind that you are in the wilderness so you should be vigilant. Green dragons are an extremely popular PKing hot spot. You will most likely die more times from being PKed than actually being killed by the dragons. This is why you should not risk any items in there wilderness thinking you will be safe. There will always be a moment where you are caught off guard and you die. Once you kill the green dragons, pick up the green dragon hide and the dragon bones and deposit them once you have a full inventory, then teleport back. Repeat this process as many times as you want then sell your items at the grand exchange for a nice profit.

You can make anywhere from 400k to 900k per hour depending on your combat level. Another good combat boss is Vorkath. This boss will always provide a nice consistent income. It can range between 1m per hour to around 4m per hour depending on your combat level. Range is the most popular option to go for here due to the mass damage it can deal to the Vorkath boss. To kill Vorkath, you will need to have completed the Dragon Slayer 2 quest which can be quite difficult to complete as there is a 200 quest point requirement to even begin this quest. 200 quest points can take a very long time to achieve. Vorkath has two special attacks.

The first one is an ice bolt that freezes you and released a crab which you must kill before it reaches a tile within you and blows up dealing mass damage. The second special attack is a pool of acid which you must avoid by walking around it. Vorkath will constantly be shooting at you while this phase in going on so you must always be walking around while avoiding the acid at the same time. Vorkath overall is a very good money maker.